Skip to Main Content
It looks like you're using Internet Explorer 11 or older. This website works best with modern browsers such as the latest versions of Chrome, Firefox, Safari, and Edge. If you continue with this browser, you may see unexpected results.

DIGITAL IMAGE (INCLUDING A PAINTING, SCULPTURE, OR PHOTOGRAPH)

Provide the artist's name, the work of art italicized, the date of creation, the institution and city where the work is housed. Follow this initial entry with the name of the Website in italics, and the date of access.

List films by their title. Include the name of the director, the film studio or distributor, and the release year. If relevant, list performer names after the director's name.

To emphasize specific performers or directors, begin the citation with the name of the desired performer or director, followed by the appropriate title for that person.

Cite recorded television episodes like films (see above). Begin with the episode name in quotation marks. Follow with the series name in italics. When the title of the collection of recordings is different than the original series (e.g., the show Friends is in DVD release under the title Friends: The Complete Sixth Season), list the title that would help researchers to locate the recording. Give the distributor name followed by the date of distribution.

Generally, when citing a specific episode, follow the format below.

Begin with the title of the episode in quotation marks. Provide the name of the series in italics. Then follow with MLA format per usual.

For more formats not included here, check out the OWL at Purdue's pages on Electronic Sources and Other Common Sources.

eResources Librarian - I can help with research 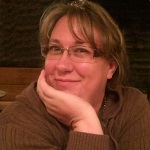